On December 4th 2017, surgeons at The Intervention Centre, Oslo University Hospital, were trained on the navigation system CAS-ONE from Cascination AG, the main industrial partner of the HiPerNav project. This system allows visualization of the liver models in 3D as well as tracking of the tools. Tools are tracked using an optical tracking system by equipping tools with reflective spheres, as used in motion capture. 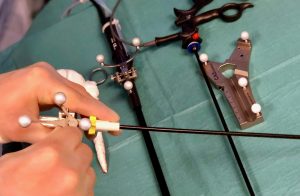 On December 5th and 6th, the CAS-ONE system was set up in the OR for three clinical laparoscopic liver resections for an early assessment of the navigation system in such procedures. During surgery, the system provided surgeons with 3D patient specific liver models. Without compromising sterility, the surgeons themselves could interact and reposition the models using the touchscreen, covered with a sterile drape. The whole navigation workflow was demonstrated and possible bottlenecks were discussed. 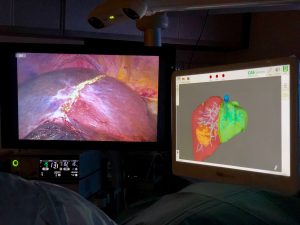 HiPerNav is a Marie Skłodowska-Curie funded European project coordinated by The Intervention Centre, Oslo University Hospital. The project’s main goal is to investigate and improve the use of navigation system for laparoscopic liver resections. Cascination AG is the exploitation partner implementing algorithms and methods developed during the project. Five of the PhDs from HiPerNav participated.

The CAS-ONE system is rented and available at the Intervention Centre. The system can be used in other medical areas such as percutaneous ablations or open surgery.